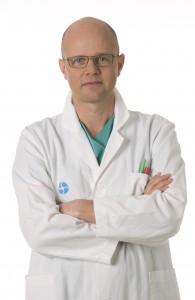 Since 2006 Dr. Med. Gudmundur Danielsson has worked at Scandinavian Venous Centre which is a leading centre in the treatment of venous diseases in Sweden and Norway. Extensive knowledge and experience in the performance of ultrasound imaging is important because the operation is based on this technique.

Endovenous operations are a new method used for treating varicose veins replacing the conventional operations. The vein is not opened in a conventional way but rather it is treated with an EVL (Endovenous laser) which is inserted into the vein and is located so that only that part of the defective vein is treated. There is no need for a conventional scalpel and there are no actual incisions made. The varicose veins are removed through the needle holes so that very small scars, if any, are visible a few months after the operation.

© Copyright 2022 Bláæðasetrið
Back to Top