Preparation for the operation at home

You should fast and not eat anything from midnight unless other arrangements have been discussed. You can drink clear liquids up to two hours before the operation. Do not smoke on operation day.
Take a shower in the morning and use regular soap to wash your body.
Do not use any creams on your legs. It s advisable to buy a compression stocking that reaches up to the groin prior to the operation. It is not necessary to bring the compression stocking with you as the stocking will not be used until the bandage has been removed after one or two days.
You will get relatively bulky bandages after the operation. Therefore is it advisable to be dressed in soft loose trousers and to use shoes that are wide and which it is easy to put on and remove. 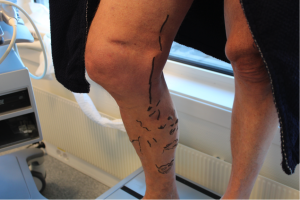 In the operating room 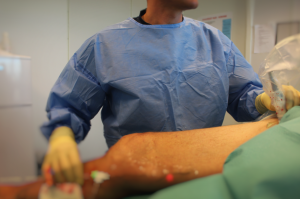 RVC is using a state of the art laser device (ELVeS Radial 2ring™) which is internationally recognised as being one of the best and there has been a lot of experience gained in its use. The operation is performed under local anaesthesia and there is no need for general anaesthesia. The operation is performed under ultrasound scanning (Mindray DP-50). The treatment is endovenous which means that the vein is not opened in a usual way instead treated using a laser fiber that is inserted into the vein and only the defective part of the vein is treated. The vein is closed with this technology and it will not be observable with ultrasound scanning few months later. There are no incisions made. 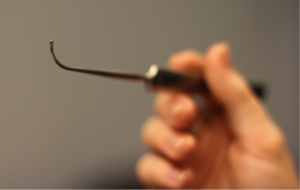 ÆThe varicose veins are removed after the laser treatment. A needle hole (1.0-1.2 mm) is made in the skin and varicose veins are extracted with a tool that looks like a crochet hook. There are small or no scars visible and with respect to cosmetic appearances the result is very good.

There is an injection made into the spider vein area using a certain compound that causes the vein to collapse and become non-functional. The name of the compound is Aethoxysclerol and is available in two solutions of different strength; 0.5% or 1% depending on the size of the varicose vein which solution is used. In the case of large spider vein and of lesser types of varicose veins sometimes foam solutions are used that are made by combining air and Aethoxysclerol. Occasionally this treatment needs to be repeated at a later time but normally the next treatment is given 4 months later. 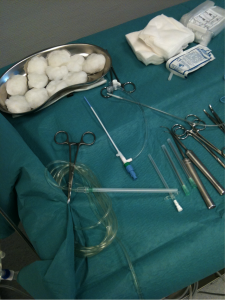 There may be some feeling of numbness in the vicinity of the prickling holes for a period after the operation. However this is rare. Normally feeling will return after some days but occasionally this condition may last longer. Infections are very rare as the holes that are made are very small. If you observe redness, have a temperature or other discomfort that indicates an infection then you should contact us.
A blood clot following a varicose vein operation is also very rare. By moving about you will reduce the risk of a blood clot formation. The symptoms of a blood clot may be a sudden pain in the calf which you will experience as being tense and warm.
If you have any symptoms that you find unusual following an operation then you should contact us. Two weeks after the operation you may feel minor pain in the area where the laser treatment was given. This is not dangerous and it is enough to take a painkiller if needed. It is not uncommon to have a small swelling of the skin around the holes and this will disappear in a few days. Bruised skin where the varicose veins were will disappear in a few days or weeks.